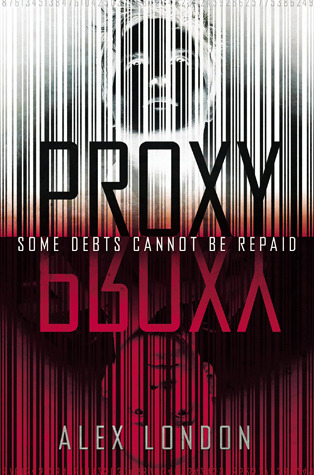 Knox was born into one of the City’s wealthiest families. A Patron, he has everything a boy could possibly want—the latest tech, the coolest clothes, and a Proxy to take all his punishments. When Knox breaks a vase, Syd is beaten. When Knox plays a practical joke, Syd is forced to haul rocks. And when Knox crashes a car, killing one of his friends, Syd is branded and sentenced to death.

Syd is a Proxy. His life is not his own.

Then again, neither is Knox’s. Knox and Syd have more in common than either would guess. So when Knox and Syd realize that the only way to beat the system is to save each other, they flee. Yet Knox’s father is no ordinary Patron, and Syd is no ordinary Proxy. The ensuing cross-country chase will uncover a secret society of rebels, test both boys’ resolve, and shine a blinding light onto a world of those who owe and those who pay. Some debts, it turns out, cannot be repaid.

Proxy is a book deeply reliant on its world. Despite this fact, there is very little on-page world building. It’s a method I have always been a fan of, to throw the reader directly into the world without spoon feeding them an explanation. I enjoyed this aspect of the book, but it did mean that getting into the swing of Proxy presented its own challenges.

The most important thing to understand about this world is the titular proxy system that causes many a conflict for our main characters. The primary lesson learned from this system is that actions have consequences, and, well, everything costs. Syd and his patron, Knox, live wildly different lives, and the beginning of the book serves to show us this.

“He wasn’t worried about breaking the rules. If you could pay, the rules were yours to break.”

Alex London opens up on an exhilarating scene that feels like a high-speed car chase, which, in some ways, it is. Because this opening scene serves to establish Knox as a fun-loving rule breaker by throwing the readers into the middle of a reckless and frenetic car ride.

On the flip side, the following chapter allows us a view into Sydney’s, less exciting and far grittier, world. Everything in this pair’s lives is vastly different, and London uses the juxtaposition in perspectives to highlight this. While Knox is introduced under flashy lights and fancy cars, we already see Syd surrounded by broken technology (and systems) and other poor and struggling children.

Aside from the basic aspects of the novel, there were a few things that I utterly enjoyed from Proxy.

Firstly, I loved the take on the Chosen One trope. It was really interesting to see how Syd handled the news of being “no ordinary proxy.” Even upon finding out that he could be the solution to a deeply corrupt system, he is skeptical and reluctant. I truly appreciated seeing a more accurate human portrayal in a protagonist that didn’t want to immediately sacrifice themselves, even if it was the right thing to do.

“It’s not easy to throw your life away, even for a good reason, even when it’s the right thing to do. It was simple enough. Debt or no: Syd did not want to die.”

The biggest double-edged sword of this story was the characters. In some ways, I found the characters to be one of my favorite parts of the experience. The development from who each person is at the beginning of the novel to who they are at the end is a superb demonstration on how audience perception of a character can (and should) change.

However, even though I found the development to be excellent, the characters still seem shallow. Every character seemed to serve more as an archetype than a fleshed-out personality. Even the two main characters, who were most explored, were one-dimensional. The secondary characters didn’t stand a chance up against this. They fell even flatter than Syd and Knox, serving as a single idea or only as a method to move the plot along.

However, I kind of understand why the characterization fell to the wayside. Because, in it’s most fundamental state, Proxy is a book with a message. Most dystopian novels provide social commentary, but this novel is almost entirely a fictional critique on the aspects of poverty and wealth in modern society. With such an important topic being the focus of this novel, it makes some sense that other elements could be on the weaker side.

That being said, this is certainly more of a political read. Proxy is worth a chance for the message alone, but if that isn’t your thing, maybe skip out on this one.

One thought on “Proxy by Alex London // Review”